Nozomu Yoshioka (JPN) picked up where his teammates had left off last week and brought home another gold for Japan in what was his debut at the Series. Silver medallist Nikolaj Memola (ITA) and bronze medallist Andreas Nordeback (SWE) earned their ISU Junior Grand Prix medals after competing in the Series before.

Yoshioka stood in second place following his Short Program to “Malaguena” where he hit a triple Axel but struggled with the triple loop. Skating to “Pirates of the Caribbean”, the 18-year-old Skater landed a quad toe-double toe combination, another quad toe and five clean triples and totalled 219.68 points to move up to first place. “Team Japan did very well and I tried my best as well,” Yoshioka said. He is heading next to the fifth Junior Grand Prix event in Gdansk (Sept. 28 – Oct. 1, 2022) where he hopes to qualify for the ISU Junior Grand Prix of Figure Skating Final, which will take place in Torino (ITA) from December 8th to 11th 2022.

Memola, who has competed in the ISU Junior Grand Prix circuit since 2018, pulled up from fourth to second place with his Free Skating to “Samson and Daliah” that included two triple Axel and four good triples. The Italian collected 214.11 points. 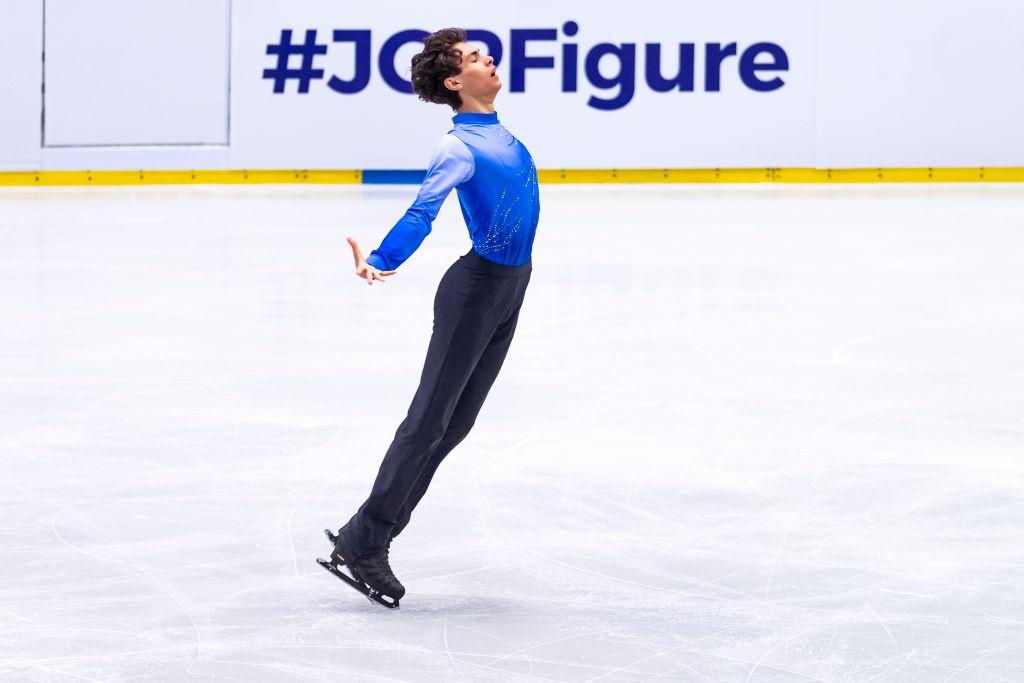 Nordeback put out a solid Free Skating with two triple Axels and only messed up a double Axel at the end of his program to remain in third place (212.37 points). He is the first man from Sweden to win a medal on the ISU Junior Grand Prix since Adrian Schultheiss, who came first and second in two events back in 2005. 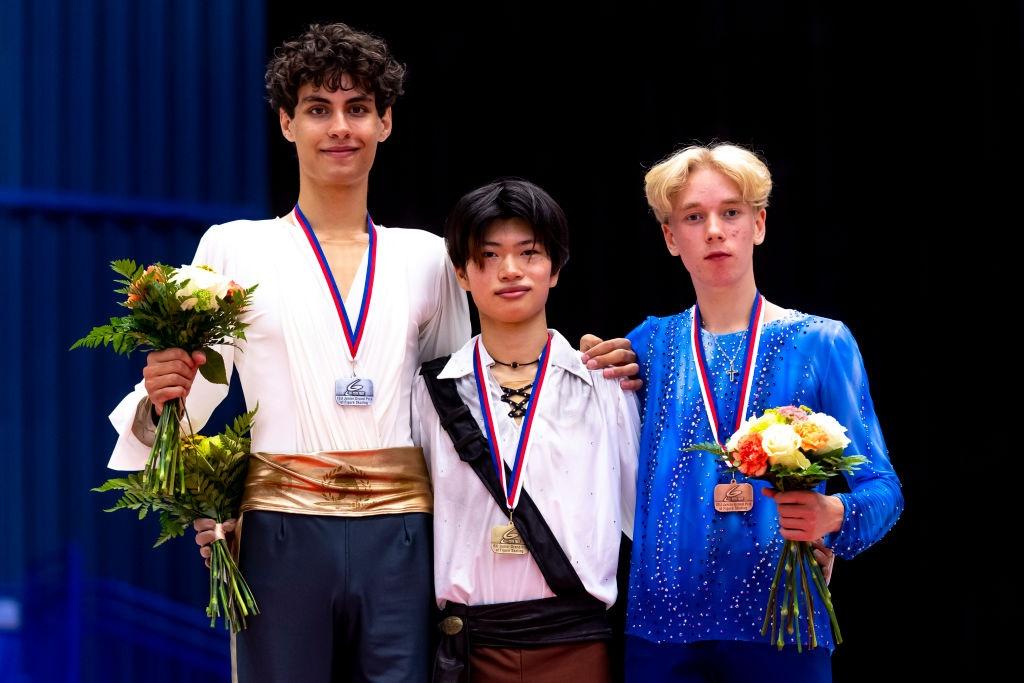 In the 2004/05 season – 18 years ago  – a young Skater named Mao turned heads when she took the ISU Junior Grand Prix by storm, landing her trademark triple Axel.

This Skater was Mao Asada, who went on to become an icon of the sport, a three-time ISU World Champion and Olympic silver medallist. In Ostrava, it was 13-year-old Mao Shimada (JPN), named after the Japanese super star, who drew attention, hitting a triple Axel in her Free Skating set to “Passepieds” and “Wild Swans Suite”. She even went for a quad toe, but fell. Unfazed, the Japanese reeled off seven clean triple jumps to win the first ISU Junior Grand Prix event of her career. Shimada led the Short Program with nine points to spare with another excellent performance and overall racked up 212.65 points. “I fell on my quad toe and I would have had more points if I had landed it,” she commented and confirmed that she is looking up to Mao Asada. 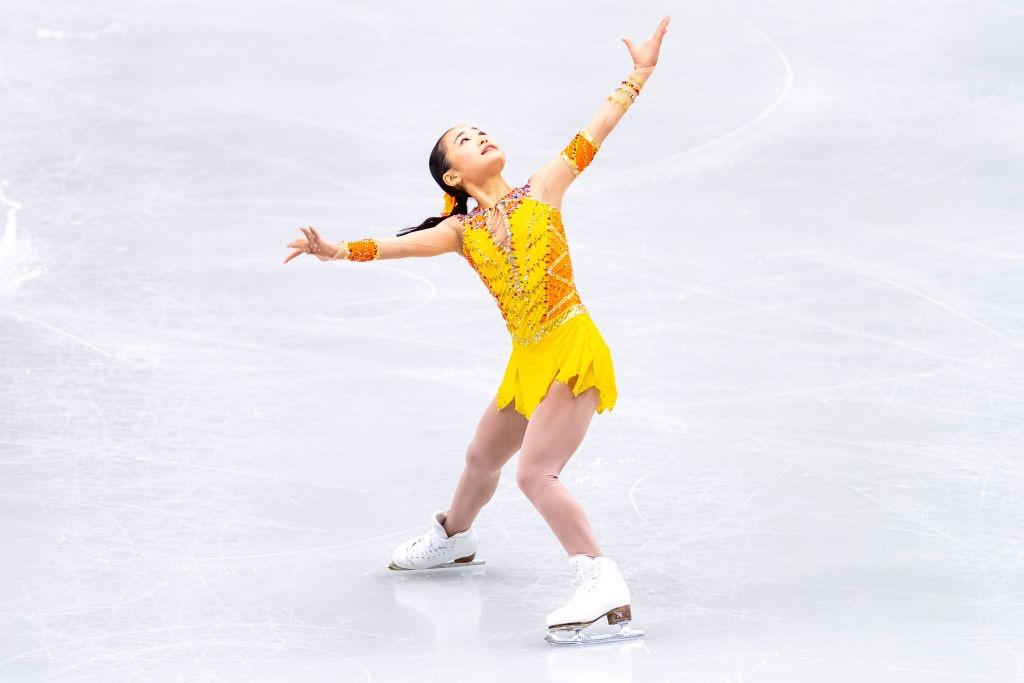 Minsol Kwon (KOR) shone in both programs as well. The 13-year-old Skater did not set a foot wrong in her Short Program to “Danse Macabre” nor in her Free Skating to “Cats”, producing clean triples and excellent spins to take home the silver with 189.37 points. 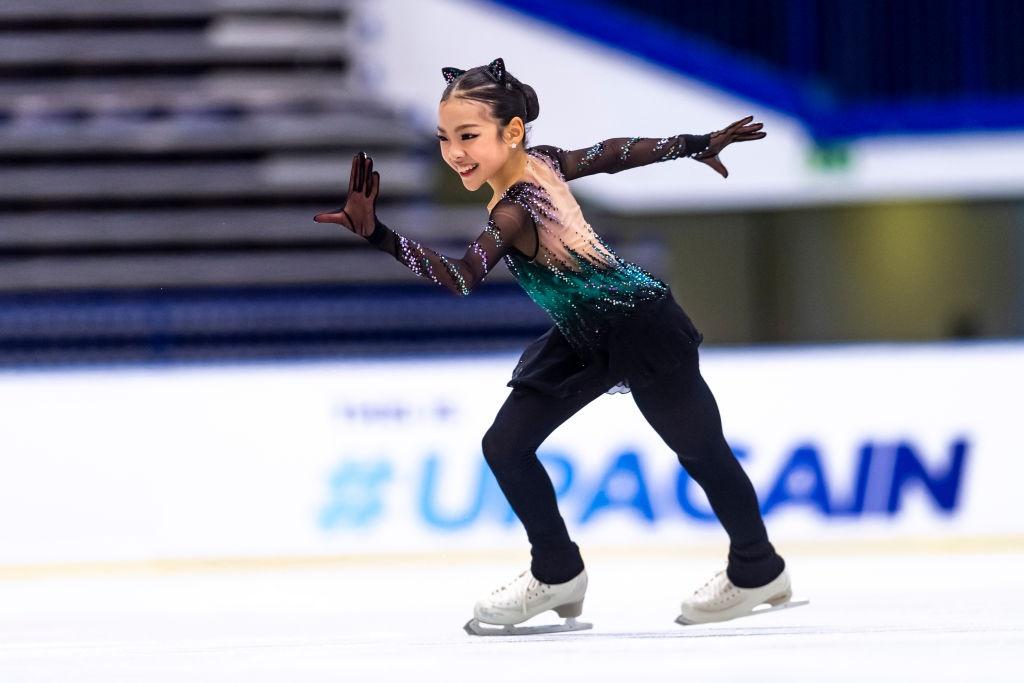 Ikura Kushida (JPN) ranked eighth following the Short Program after falling on the triple loop and struggling with her triple Lutz-triple toeloop combination. The 14-year-old athlete, who trains like Shimada with Mie Hamada and her team, then rallied back in her Free Skating that contained five clean triple jumps to move up to third place (177.02 points). Like the other medalists, she debuted on the ISU Junior Grand Prix. 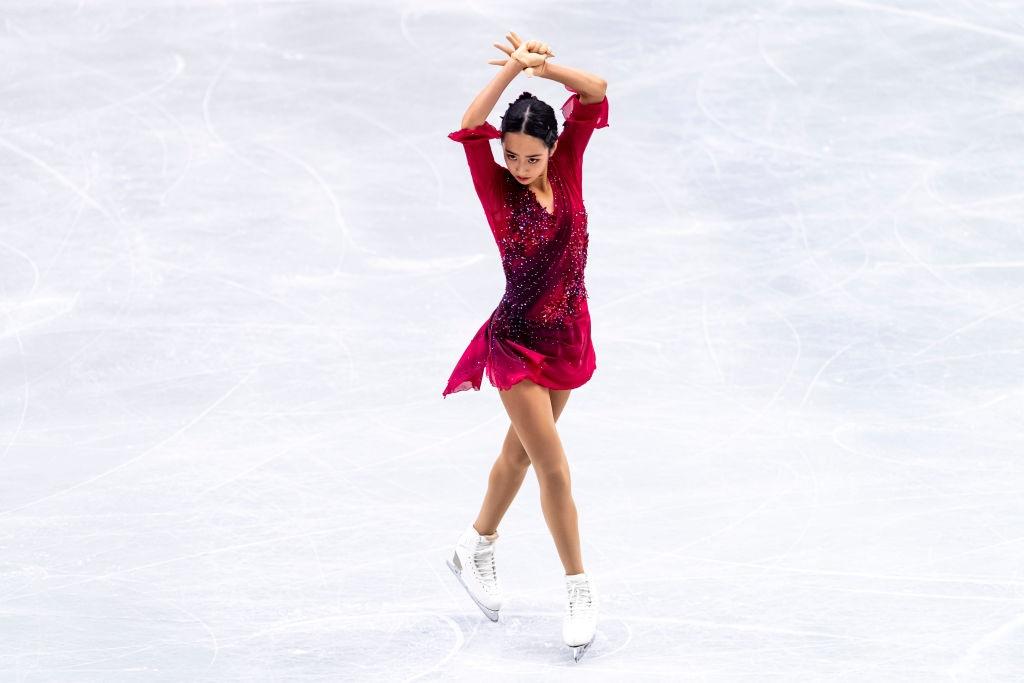 Mia Kalin (USA) landed two quadruple toeloops in her Free Skating, but made errors on two other jumps to slip from third to fourth (175.85 points). 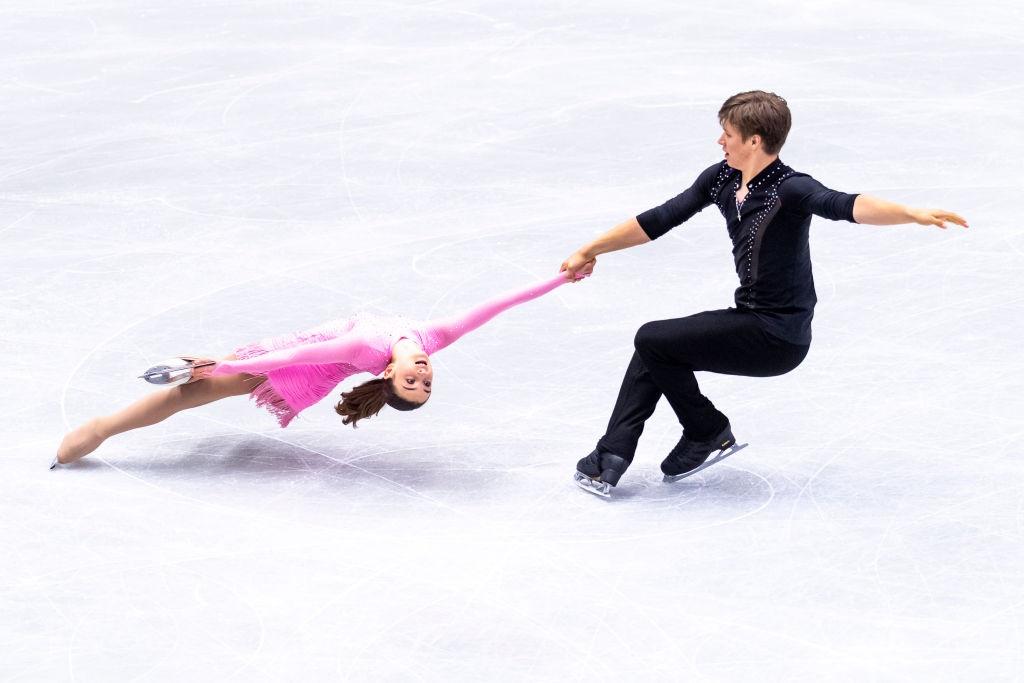 “We are very excited. I think this is something we both have been working for a very long time and to see all this hard work pay off finally and start our journey on the Junior Grand Prix Series is a dream come true,” Tioumentsev shared.

Smith/Deng ranked second in the Short Program in spite of an error on the throw triple toeloop. They came fourth in the Free Skating to “Angel and Damon” by Maxime Rodriguez after some errors, but overall held on to second place at 140.72 points. The two U.S. Pairs competed in their first ISU Junior Grand Prix.

Chloe Panetta/Kieran Thrasher (CAN) took the bronze medals, their first medal after ranking sixth a year ago in their debut (139.72 points). 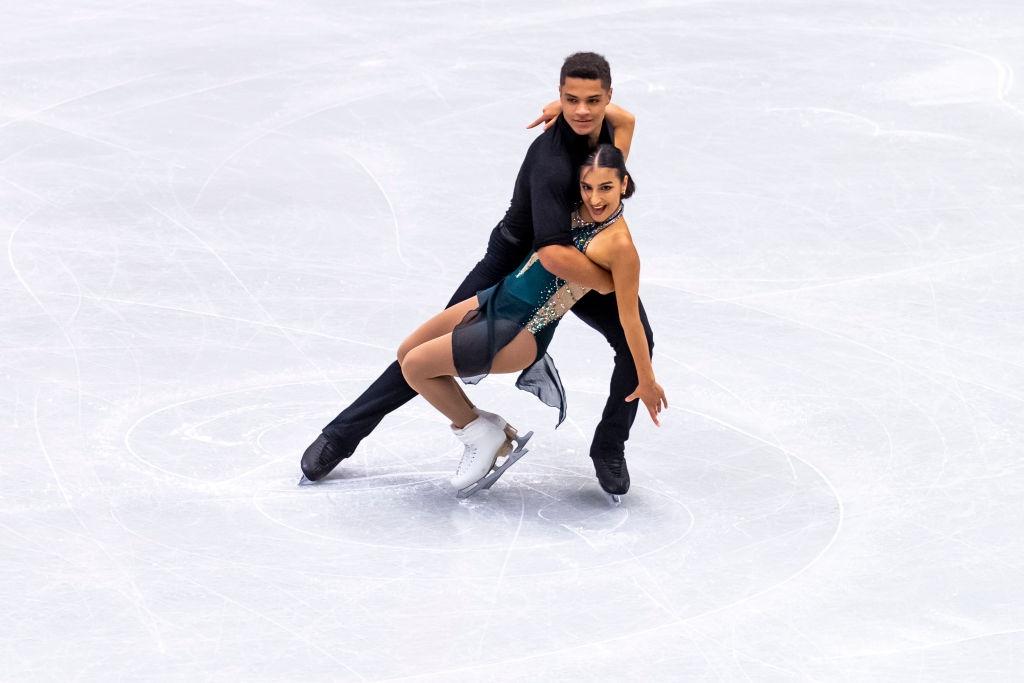 Katerina Mrazkova/Daniel Mrazek (CZE) not only claimed the first ISU Junior Grand Prix Ice Dance title for the Czech Republic, but they did so on home ice and with almost 17 points to spare. The brother-and-sister team that train in Italy had a strong start into the competition in their Rhythm Dance to the Tango “A Evaristo Carriego” and the Paso Doble “Espana Cani”, picking up a level four for the twizzles, second Argentine Tango Pattern and the lift. 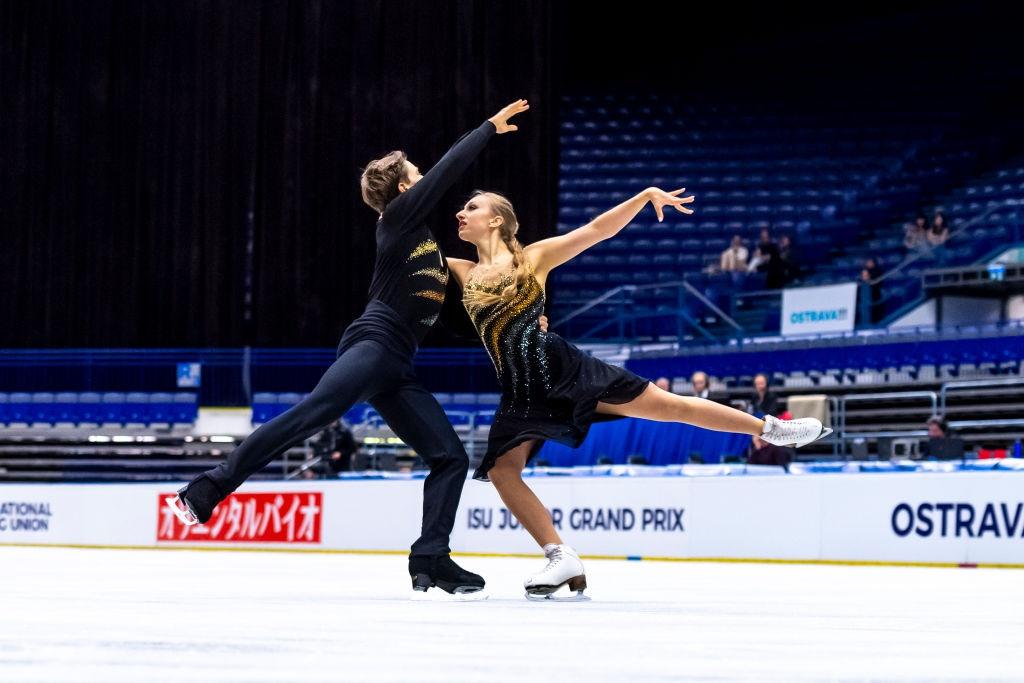 Dancing to “The Man in the Iron Mask”, the couple turned in another flawless performance that contained four level four elements. Mrazkova/Mrazek, who compete in their second ISU Junior Grand Prix season, scored 176.26 points. “It is unbelievable,” Mrazek commented. “In 2018, I was here in the same Junior Grand Prix as a single Skater and I finished like 15th. Today I’m here with my sister, my partner. We achieved something we didn’t believe (it was possible) in four years.”

Performing to a modern arrangement of “The Four Seasons”, Phebe Bekker/James Hernandez (GBR) danced to the silver medal, the first medal for a British Ice Dance team on the ISU Junior Grand Prix (159.55 points), while Nao Kida/Masaya Morita (JPN) picked up the bronze, which was also a first for Japanese Ice Dance (149.66 points). 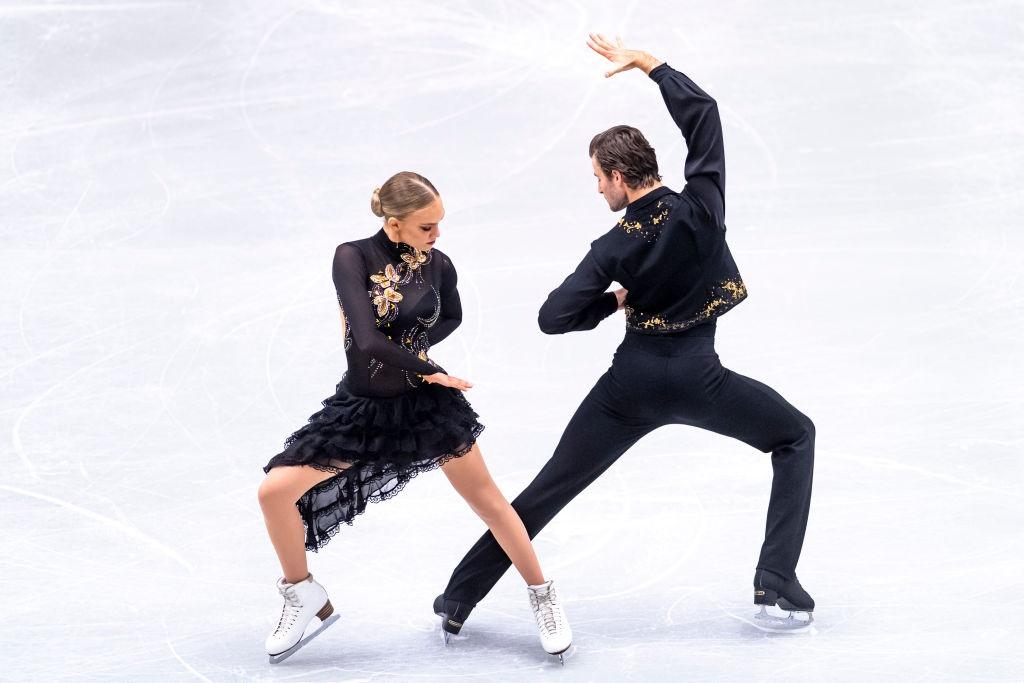 More than 300 young Skaters from over 50 ISU Members are expected to compete in this year’s Series. Each ISU Member is entitled to enter competitors for the Series while the number of their entries depends on the result of the ISU World Junior Figure Skating Championships 2022.